I’ve gone off lions a little bit. Gasp!  Sorry Elsa!  (If you don’t understand this reference read my ‘About me’ page)

Early last week we were excited to find three lionesses by a water hole.  Not far away buried in the bushes by the side of the track were the remains of a kill, and the lionesses had full bulging bellies after a good night’s feast.

They barely moved when we arrived, except to raise their heads with interest, check us out, and flop back down.   We watched for a while, took a few hundred photos between us, and moved on. 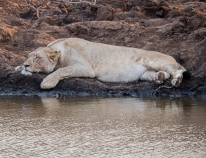 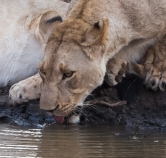 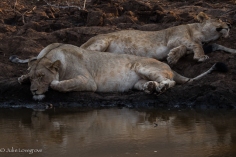 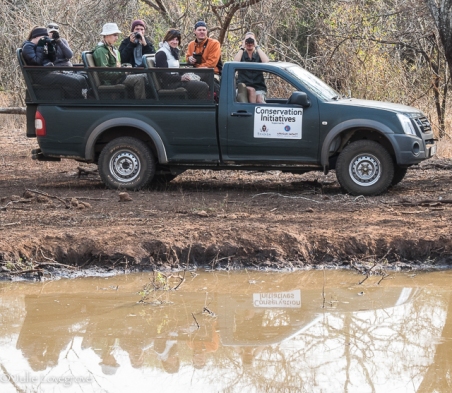 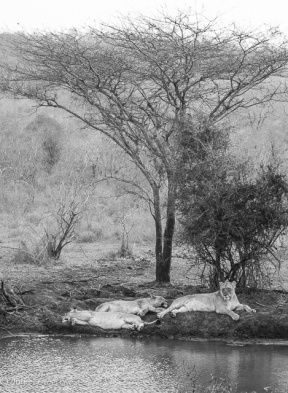 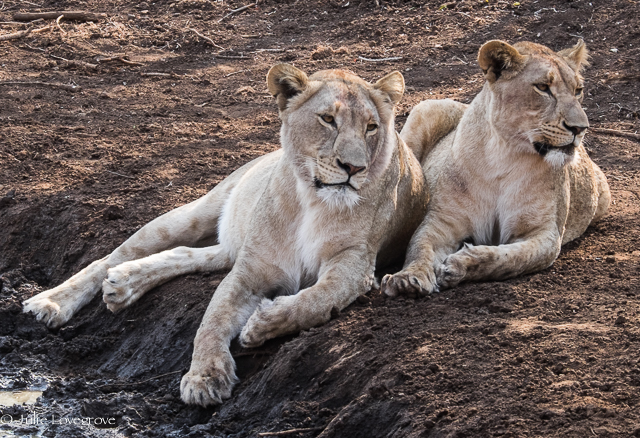 The next day they were still there.  However, this time, on the edge of the waterhole was a dead wildebeest – untouched, and further away was a dead zebra – also untouched. 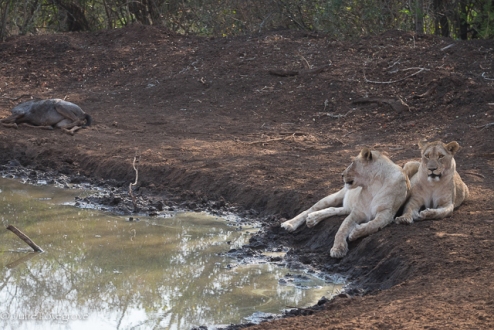 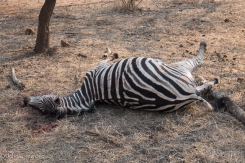 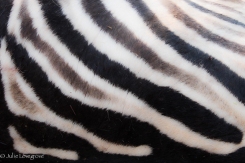 These lionesses have learned that if they hang around a water hole then they don’t have to put in too much effort to get their dinner.  What’s put me off them is that they obviously didn’t need any dinner – they just kill for the sake of it.  If an opportunity arises then they will go for it.   What is also a huge shame though is that their mere presence at the waterhole means that the other animals daren’t go near it, and it’s the only water for miles as we are waiting for the rainy season to start.  As we were about to drive off, we noticed 8 zebras hovering a short distance away, probably desperately thirsty but not daring to come any closer.

High up in the sky were a couple of vultures too.  They were circling around wanting to eat, but because neither carcass had been opened by the lions, they couldn’t, as they cannot tear open the skin.

Finally, on Friday, we drove to the waterhole again, and the lionesses weren’t there.  The zebra and wildebeest still hadn’t been eaten, but there were several Nyalas around, grateful for the opportunity to drink.   Our guide decided to give them a chance and took a knife and panga to the zebra to open it up.  By this time it’s belly was twice the size it was a few days previously, and I really didn’t want to see what I knew was coming.  Luckily, she (our guide) had instructed us all not to watch her, but to constantly look in all directions in case the lions came back.  She had pulled the game viewer right up next to the zebra, but even being a couple of feet away in lion territory is a risky business.  Vultures were perched in nearby trees and the thumping of the panga whilst trying to open it up didn’t startle them at all.  However, the moment the stomach was pierced with a mighty hiss of gas, they all took to the sky in anticipation of a good meal.  Ali, our guide, received a face full of nastiness and I was very glad I was looking in the opposite direction!  I expect we will return next week to see what the latest situation is.  Perhaps the hyenas will have also smelled it and come in to finish it off.

Our drive on Friday ended with a sighting of a beautiful bird that’s a firm favourite of most people out here – the lilac breasted roller bird. It’s a little bigger than a sparrow, and it obligingly perched in a tree near the road so that we could easily see why it’s been given its name.  (Although I’m not sure about the ‘roller’ bit!) My photo of it flying away isn’t sharp, but it shows the beautiful colours on its wings. 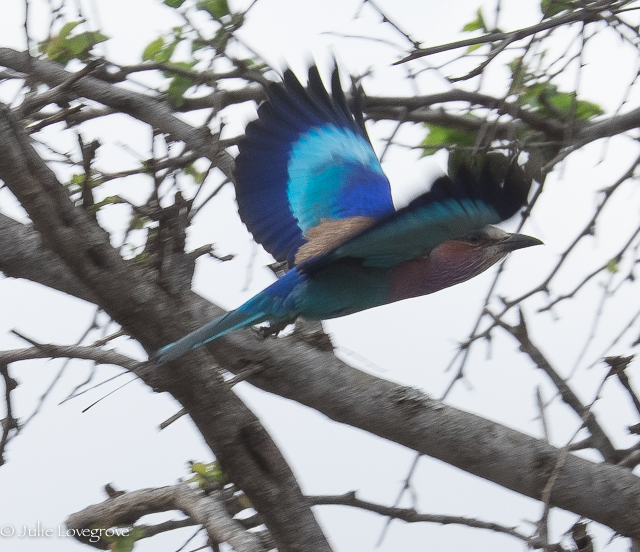