I really dislike all the pre-Christmas hype that we can’t escape in the UK.  As soon as the schools start again in September, the shops start displaying Christmas goods. Before I left to come here, our local supermarket had tins of Roses and Quality Street piled up just inside the entrance.  Being in Africa at this time of year is great, because I can escape all of that.  Don’t get me wrong – I love Christmas, but don’t want to think about it until December!  However, this week I got involved with a scheme that saw me looking at literally hundreds of gift wrapped boxes.

I recently discovered that in many countries in the world there is a scheme to fill shoe-boxes with Christmas gifts for people less fortunate than ourselves.  Here in South Africa, the scheme is called ‘Santa’s shoebox’ and we went to a church in Hoedspruit to help out the local organisers, Children’s Eco Training . 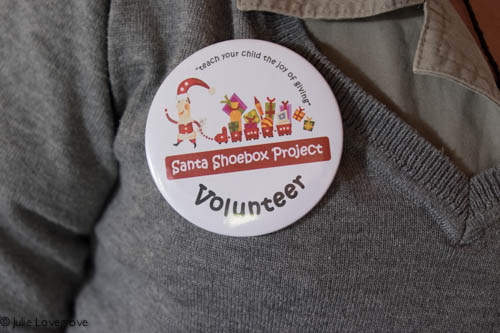 The Santa Shoebox Project originated in Cape Town and has grown in leaps and bounds, with the number of Santa Shoeboxes growing from 180 boxes in 2006 to an astounding 109,930 in 2014. The success of the project can largely be attributed to its personal nature – donors give gifts to children whose names, ages (between 6 and 16,) and genders are known.   There are very precise requirements for anyone wanting to give a shoebox.  Firstly, they must be decorated so that the lid can be taken off, (rather than simply wrapping the whole box) and they must contain the following items, which must be brand new and age appropriate.

On the front of the box is a dedicated sticker, which says who the box is for, their age, sex, clothing size, and then a tick list with the above items. 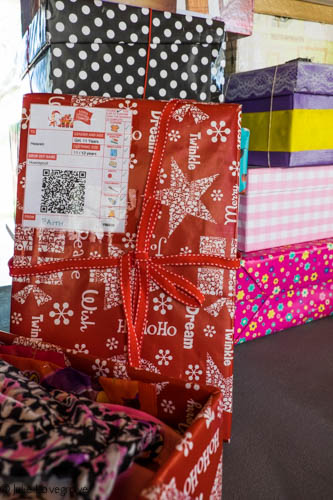 Our first job as volunteers was to help unload the donations and pile them up on a table. We formed a chain and passed the boxes along, until the person at the end could hardly see over the top. 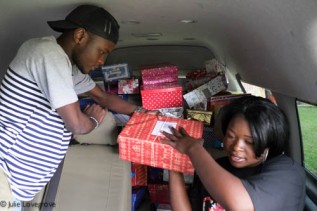 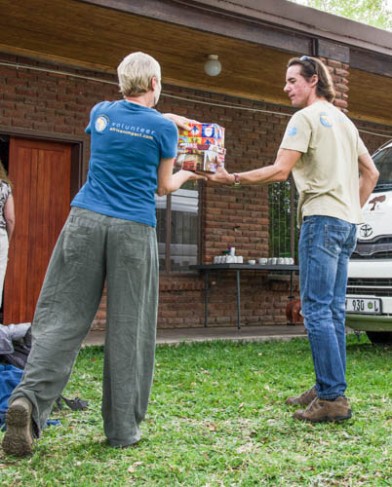 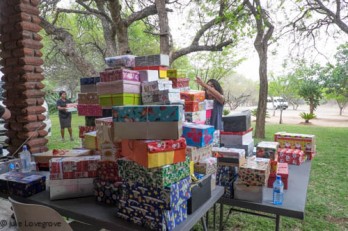 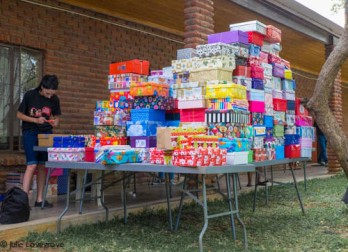 Each box had to be scanned, and then sorted into piles according to where exactly it would eventually be heading.  There were several rooms, and some of us were ‘runners’, delivering boxes to specific tables within those rooms. 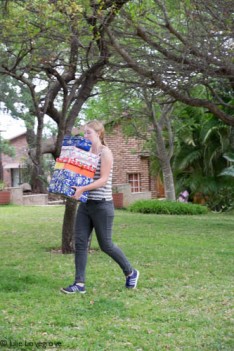 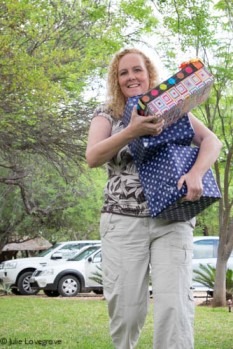 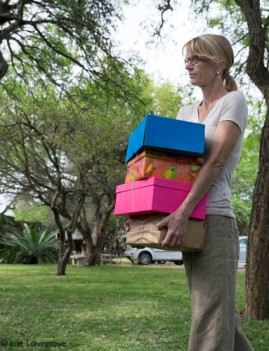 We then had to check each and every box, hence the need for the lid to be openable.  We needed to check that all the necessary items were indeed inside, that they were age and sex appropriate, and that they did not contain any breakables, medicines or vitamins, ‘war’ related toys like guns or knives, and that spillable liquids were enclosed in a waterproof bag. 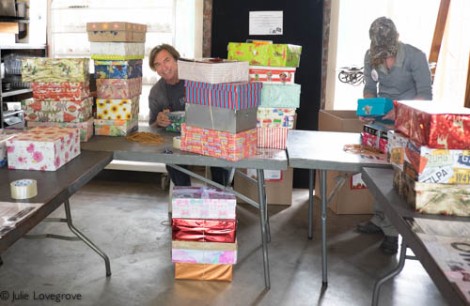 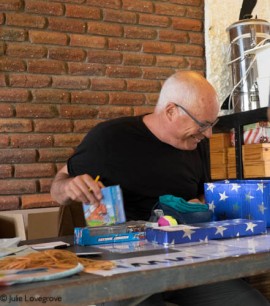 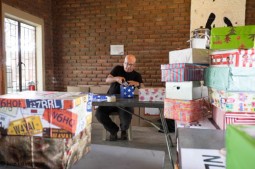 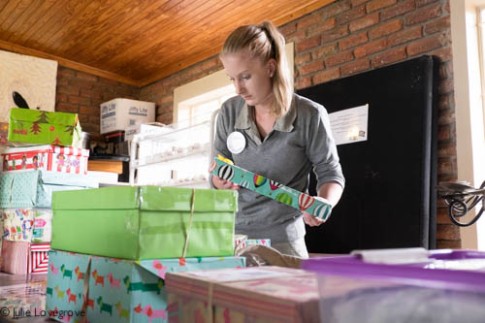 It amazed me just how much some people packed into their shoeboxes, and how much thought had gone into what those children may need or want.  We take so much for granted, and I felt quite emotional at times, imagining the delight of the repicient who would otherwise not receive anything at all.   Things had been included that Western children would turn their noses up at, or would not consider to be a gift, such as underwear, deodorant, sanitary towels, combs, elastic bands (hairbands) soap, toothpaste, school supplies, and small packets of tissues.   Some boxes had a little handwritten note inside, usually from a child, wishing the recipient a Happy Christmas.

Once we had checked the boxes we then packed them into bigger boxes ready to be sent to the relevant areas, then schools, then children. 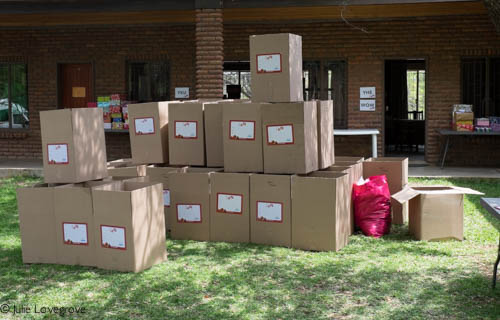 I felt privileged to have played a small part in this huge organisation that brings smiles to so many underprivileged children, and with any luck, I’ll still be here when the schools break up and can go to see some of them receiving their boxes.

So, whilst I’m on the subject of underprivideged children, we’re now into November, and on the 13th it’s my birthday.   As I’m currently working in South Africa I don’t anticipate receiving any birthday presents so I would like to make a request.

Since being here and seeing the wonderful work that is done in the community by Chidren’s Eco Training I have discovered that a child cannot attend school here if they don’t have a uniform, and buying that uniform is something that many families just cannot find the money for. A school uniform doesn’t sound like much, but for many of the kids at our adopted schools, it’s the only new clothing they’ve ever owned. It’s also a catalyst for them to take pride in their appearance and their school work.  One child can be supplied with a full uniform consisting of a shirt, shorts or a dress, a jumper, shoes and socks for R300, which is just over £14.00. I’ve never run the Race For Life, or asked for sponsorship or donations for anything before, so I would therefore love it if you would help a child go to school.  Even if just 15 of you donated £1.00, that would help one child receive an education.  Even better if that education is in an eco-school, as its purpose is to make them aware, teach them how to conserve and inspire them to appreciate nature in all its intricacies and to help them understand that for man to survive, nature must survive too.

Children’s Eco Training are hoping to provide 500 kids with uniforms before the start of the next school year. – would you be a part of it?

Just R300 (£14.05) could change a life, so every little helps, no matter how small. Please let me know if you donate, and also let me how much so that I can thank you and pass the total on to our contact here. 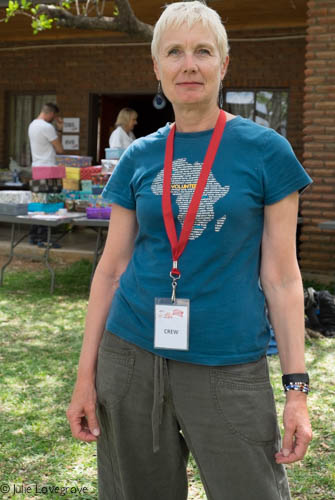