Visiting Tanzania during a pandemic proved to be an excellent time to go.  Normally the national parks would be full of vehicles, but there was hardly anyone there so we had sightings pretty much to ourselves.   Here is a selection of photographs from two days spent there.

A lone bull crosses in front of us, whilst the rest of the herd tries to get some shade. 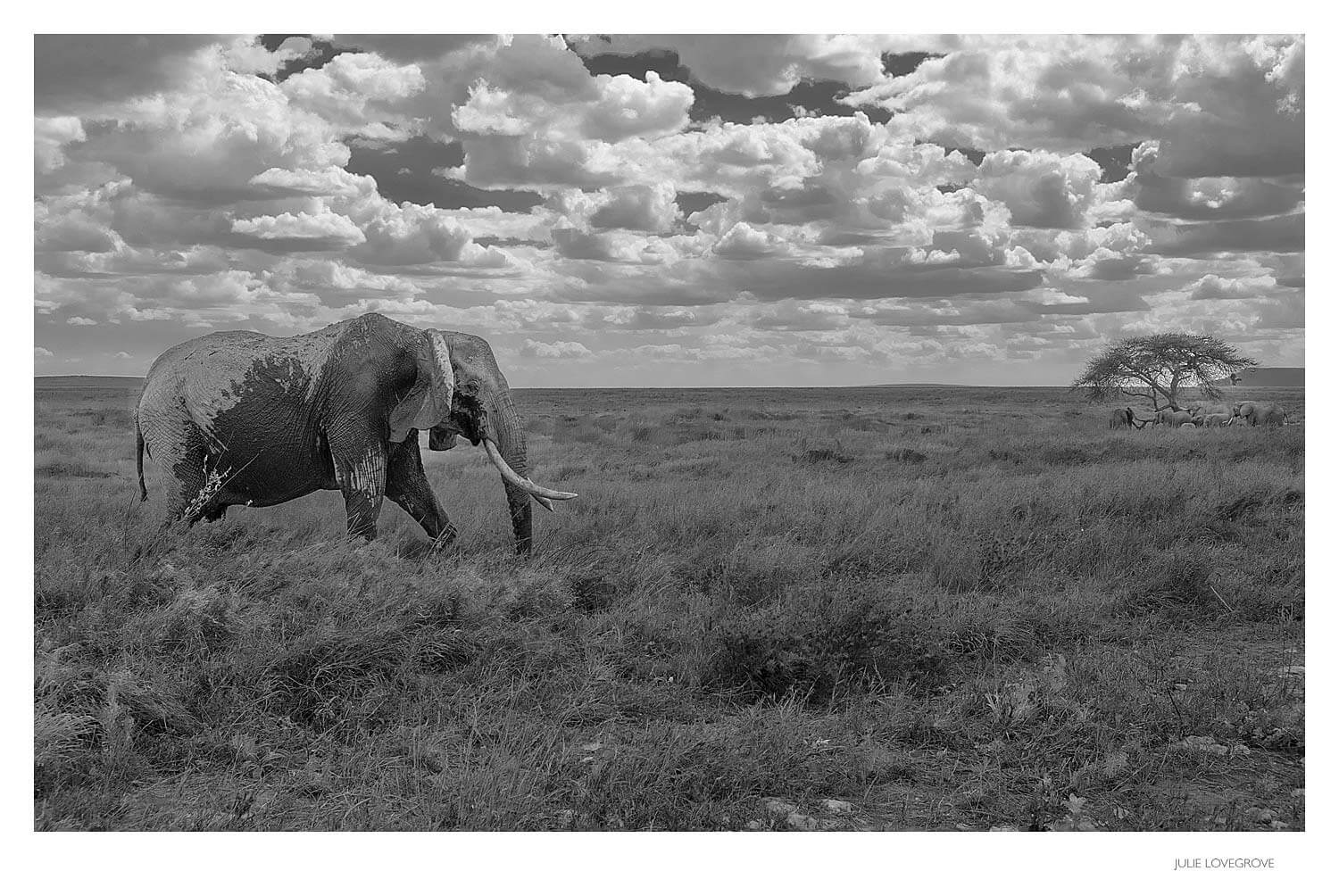 Heat haze has distorted the photo below but I do love the umbrella thorn tree. Add in a couple of elephants and the scene is complete. 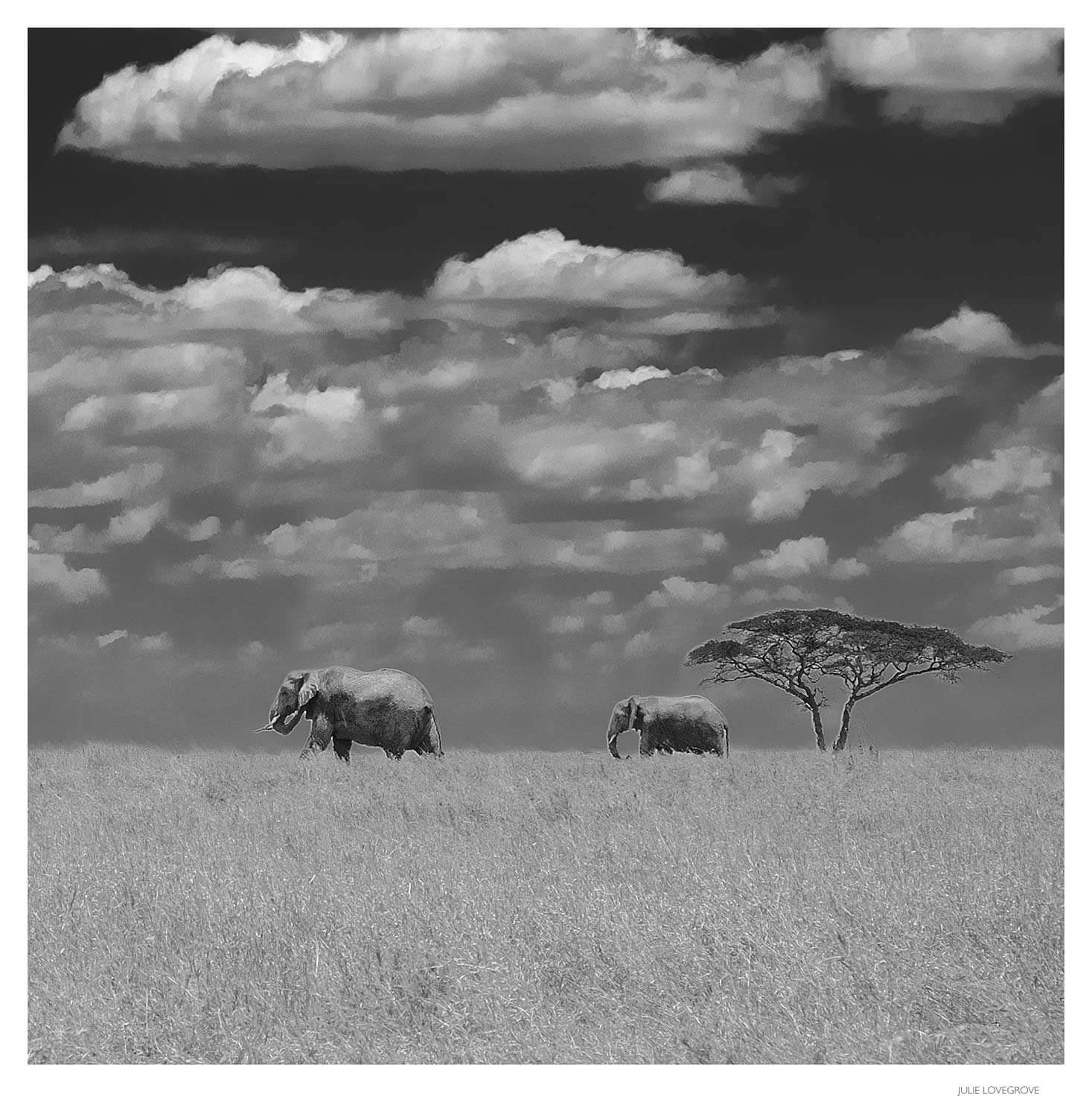 Hyenas rest in the shade during the heat of the day.

I enjoy photographing the small creatures too.  Below is an Agama lizard and a dwarf mongoose. 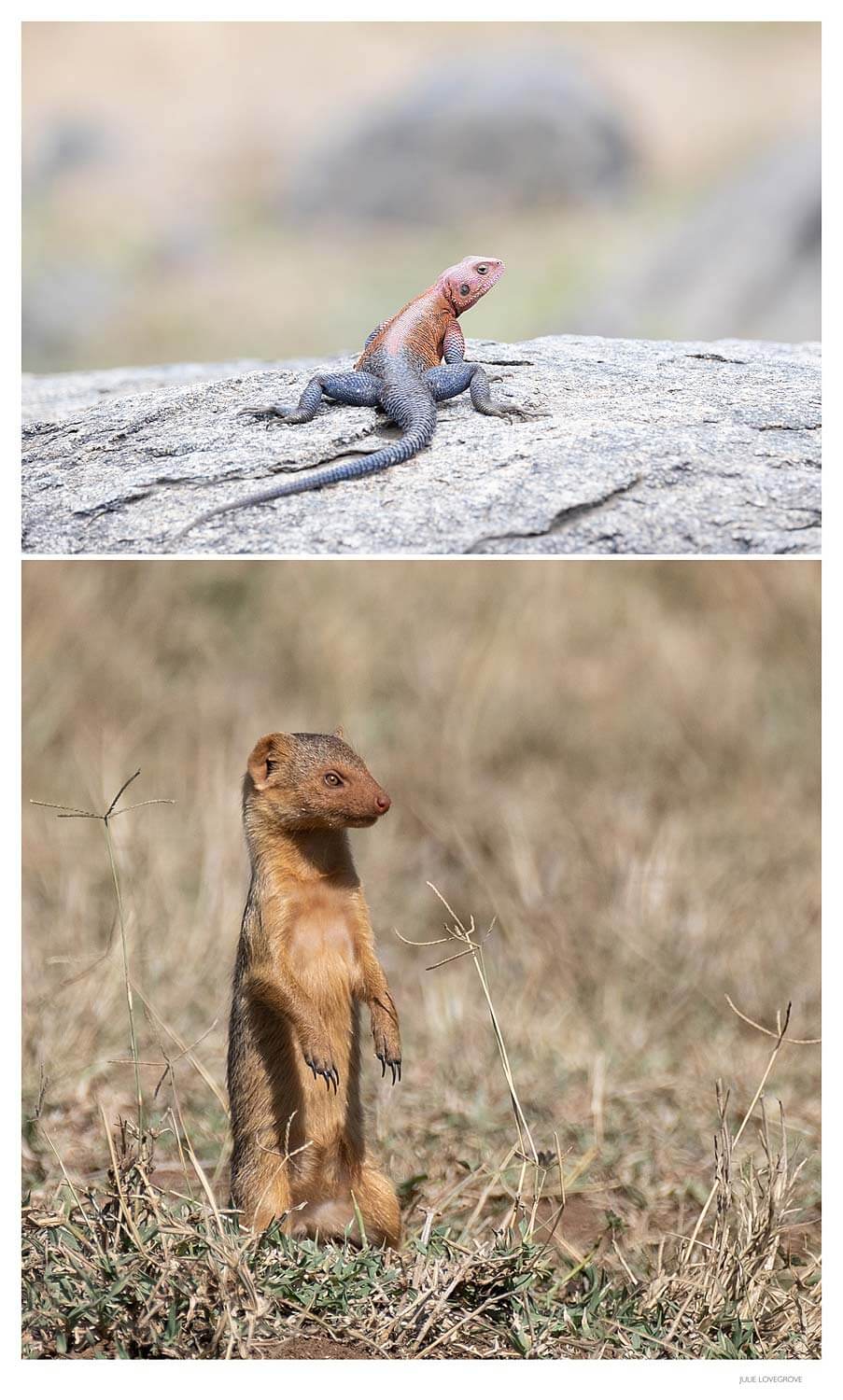 We encountered so many elephants, and I love seeing a huge herd of them. 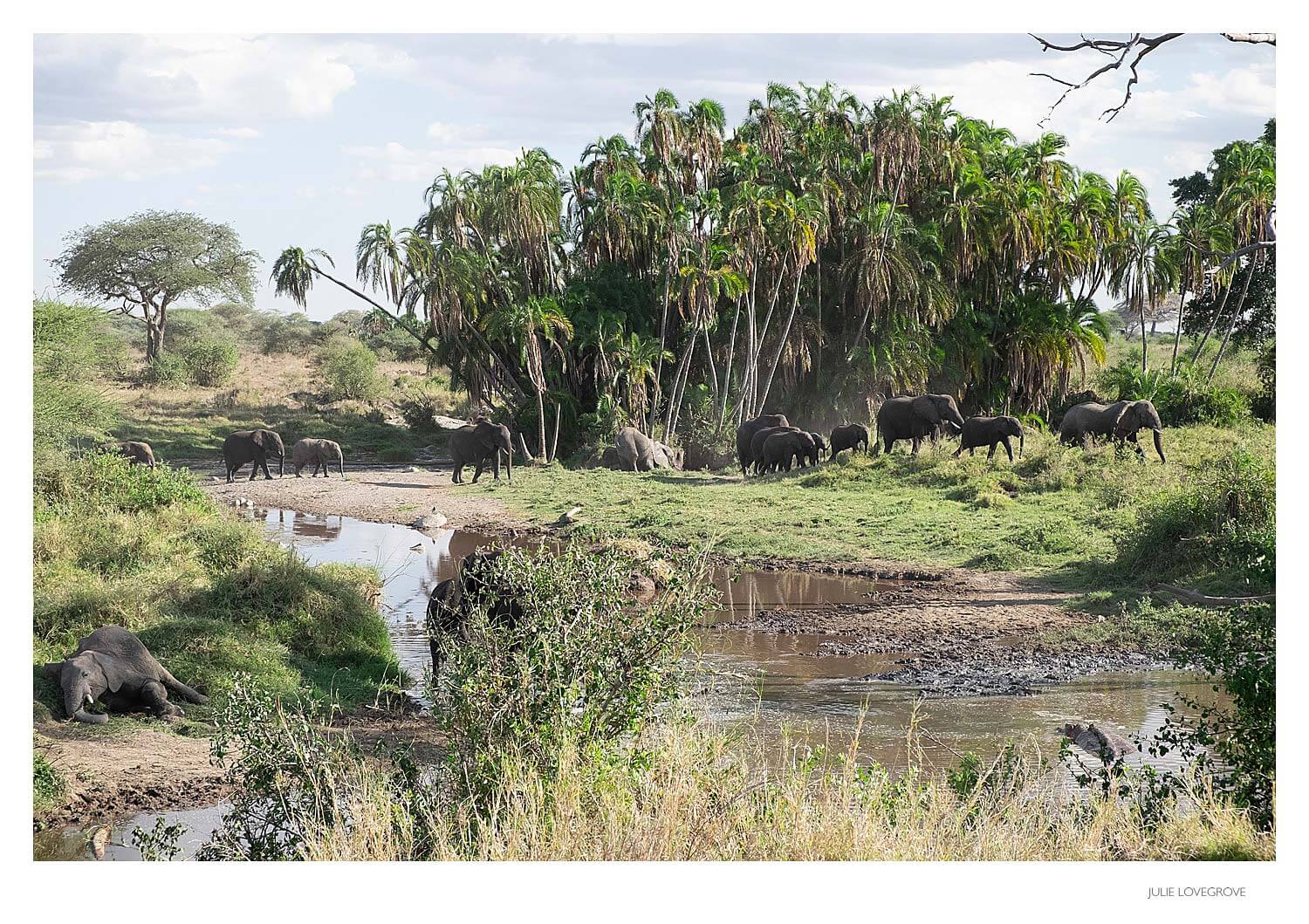 I love how this baby is hiding and blending in with this tree.

Coming at us from across the plain. 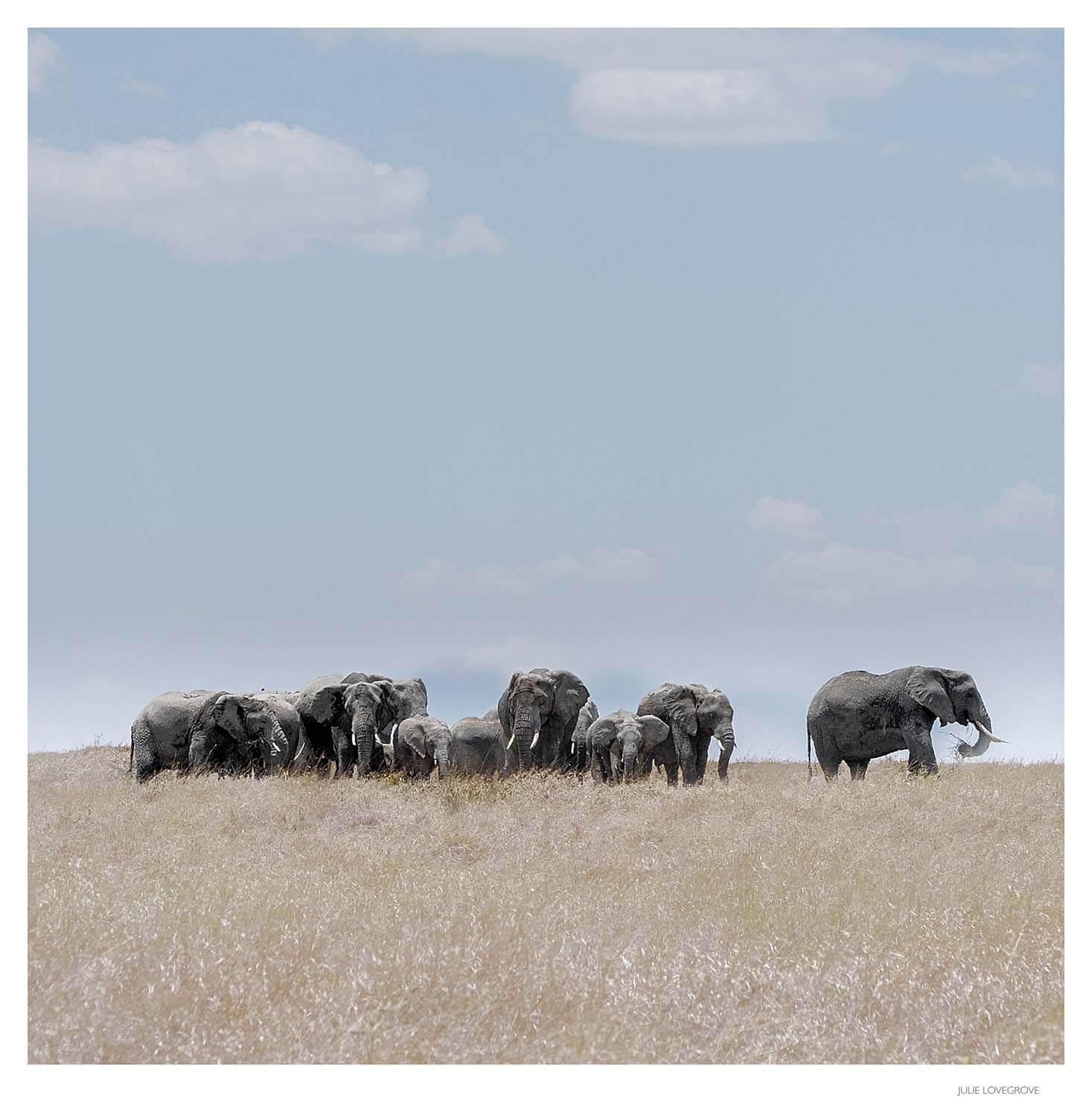 Lions don’t normally climb trees as they are pretty ungainly when up there, and especially when it’s time to get back down again.  Lions in the Serengeti have developed this unusual behaviour though.  Some believe that lions opt to climb trees to get a better view, while others believe it is so that they can catch a bit of a cool breeze on a hot day or get away from tsetse flies and other nasties that may bite them at ground level.  Whatever the reason, it’s amusing to watch, as they never look entirely at ease or comfortable.

On the other hand, a leopard loves being in a tree, and I’ve been waiting for about 10 years to see a leopard lying over a branch like this.  It was one of the highlights of the trip for me and our guide did a great job of finding it. 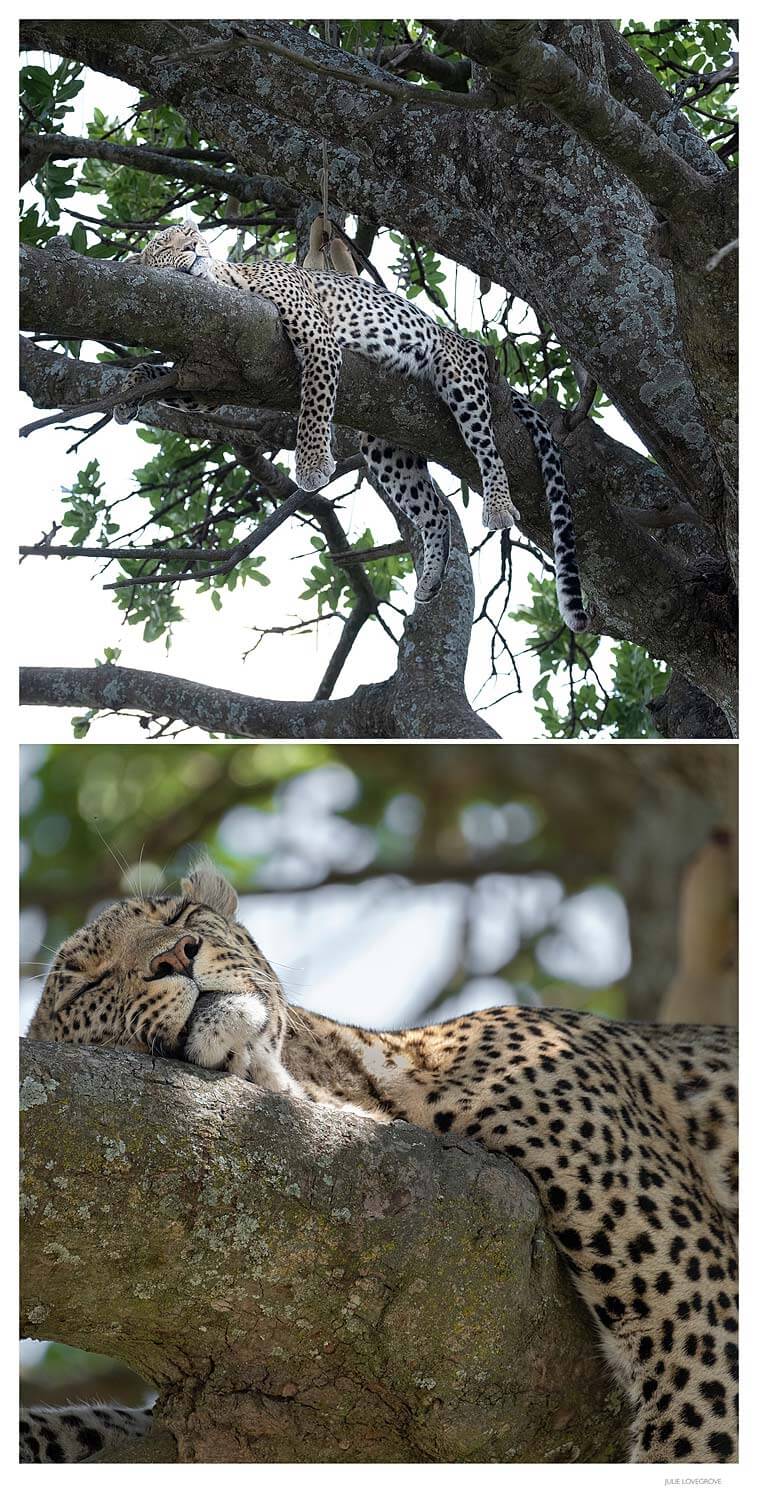 Wallowing hippos.  The water was a bit smelly but they were happily grunting to each other. 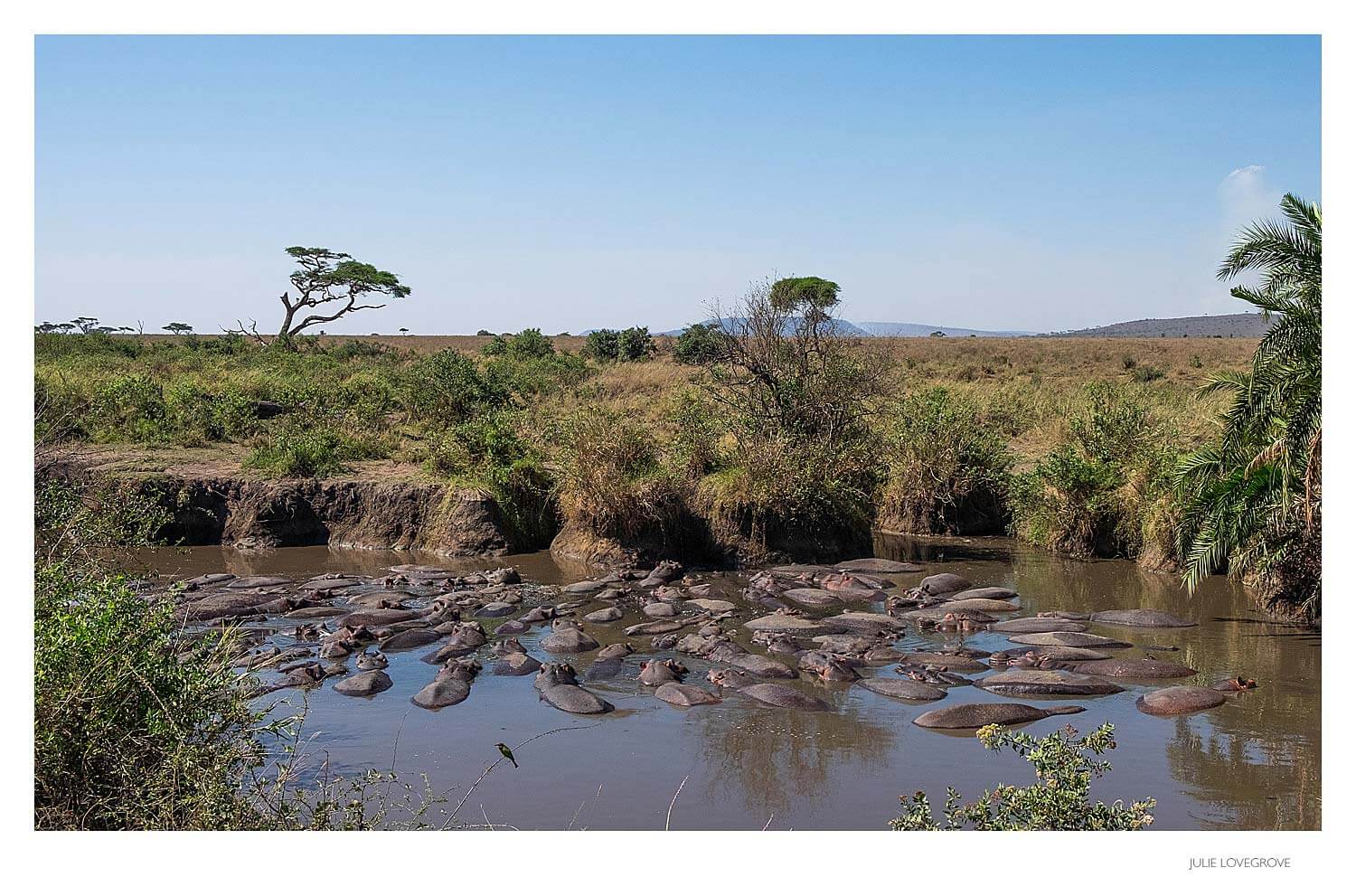 A small pride of lions on a vantage point. 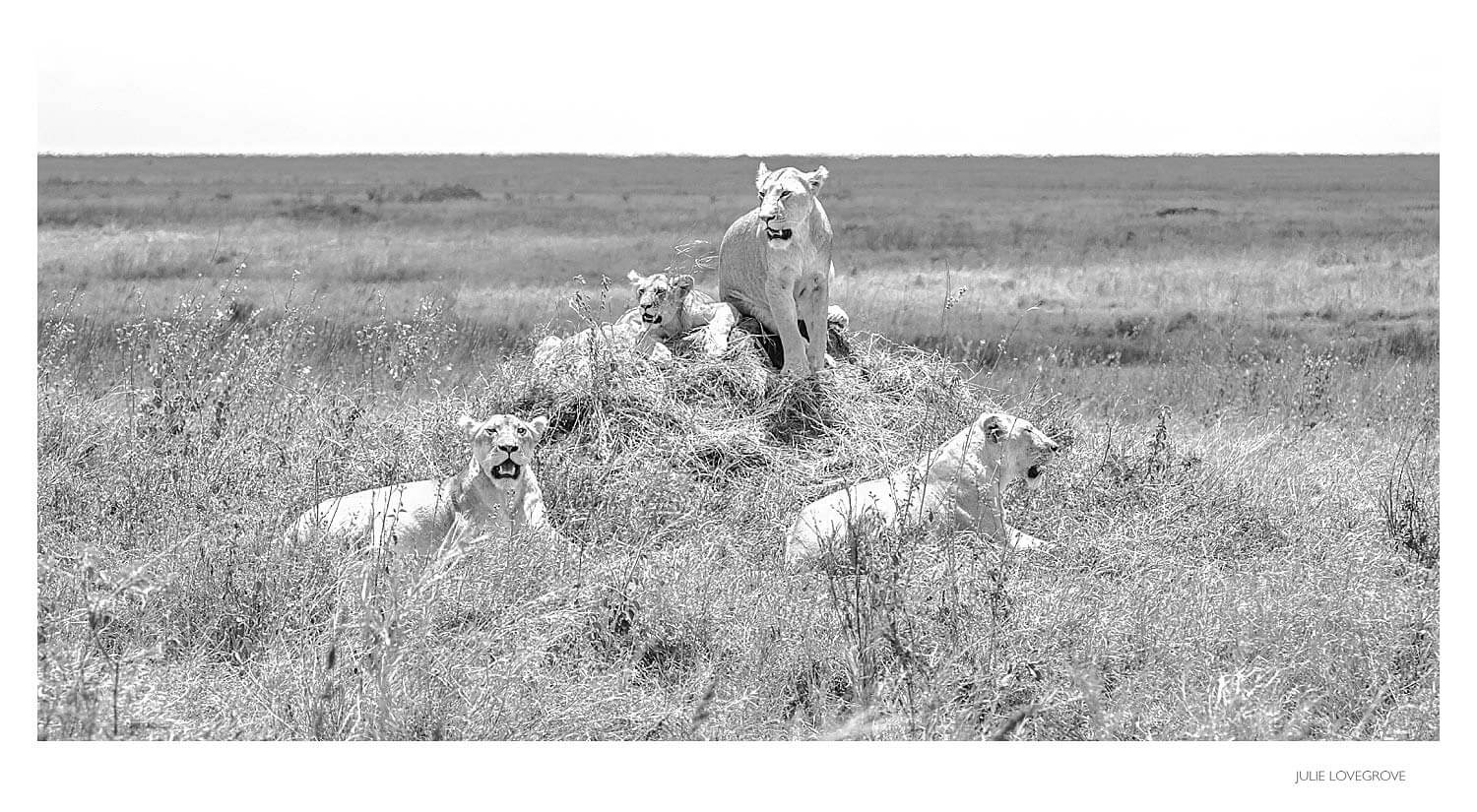 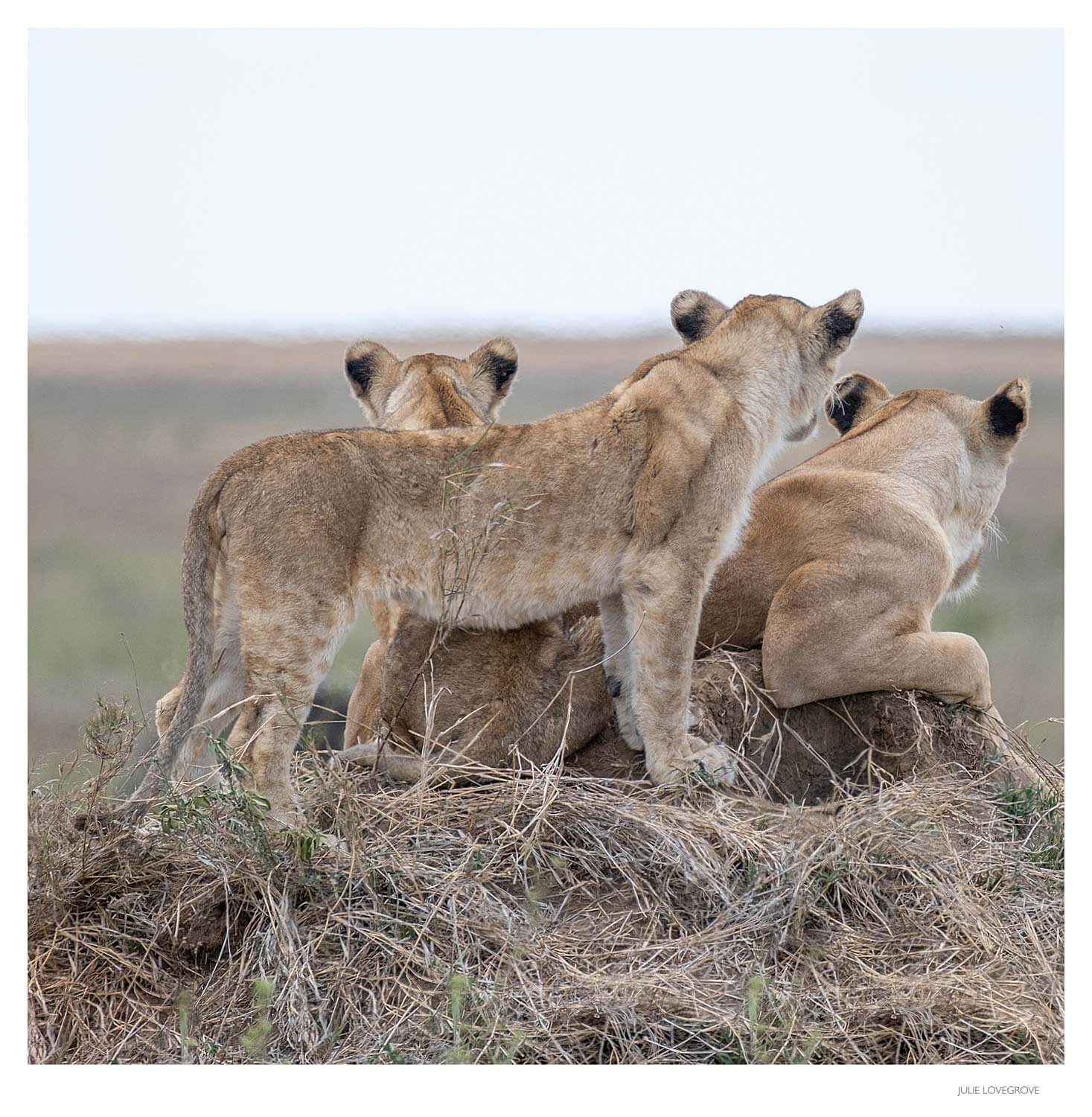 We were excited to see a mum and cubs relaxing on rocks.  Our guide was able to pull the vehicle right in front of them. 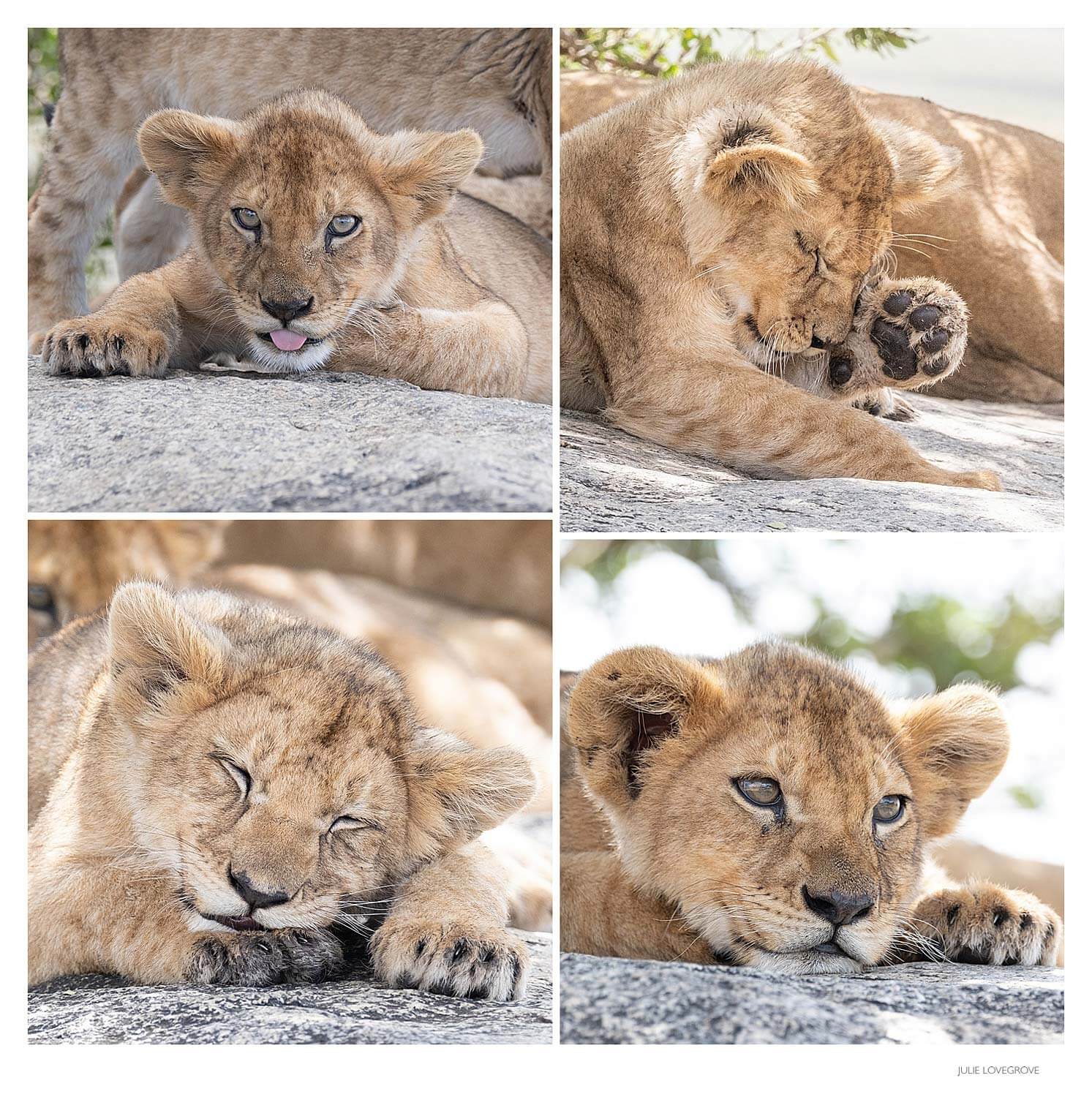 We saw many hippos in the Serengeti, and here’s an interesting fact for when a very random question pops up on quiz night – a group of hippos is called a ‘bloat’. 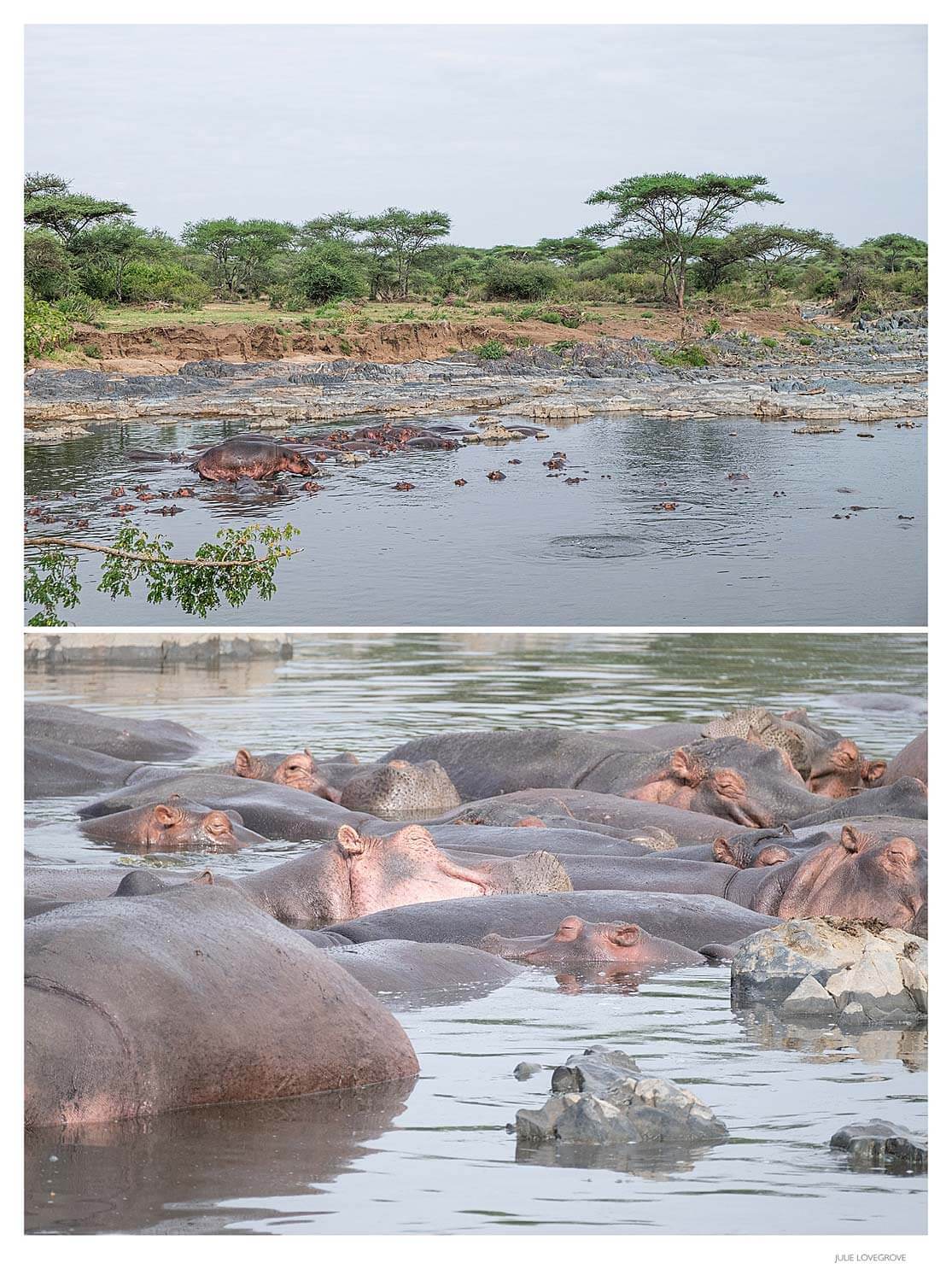 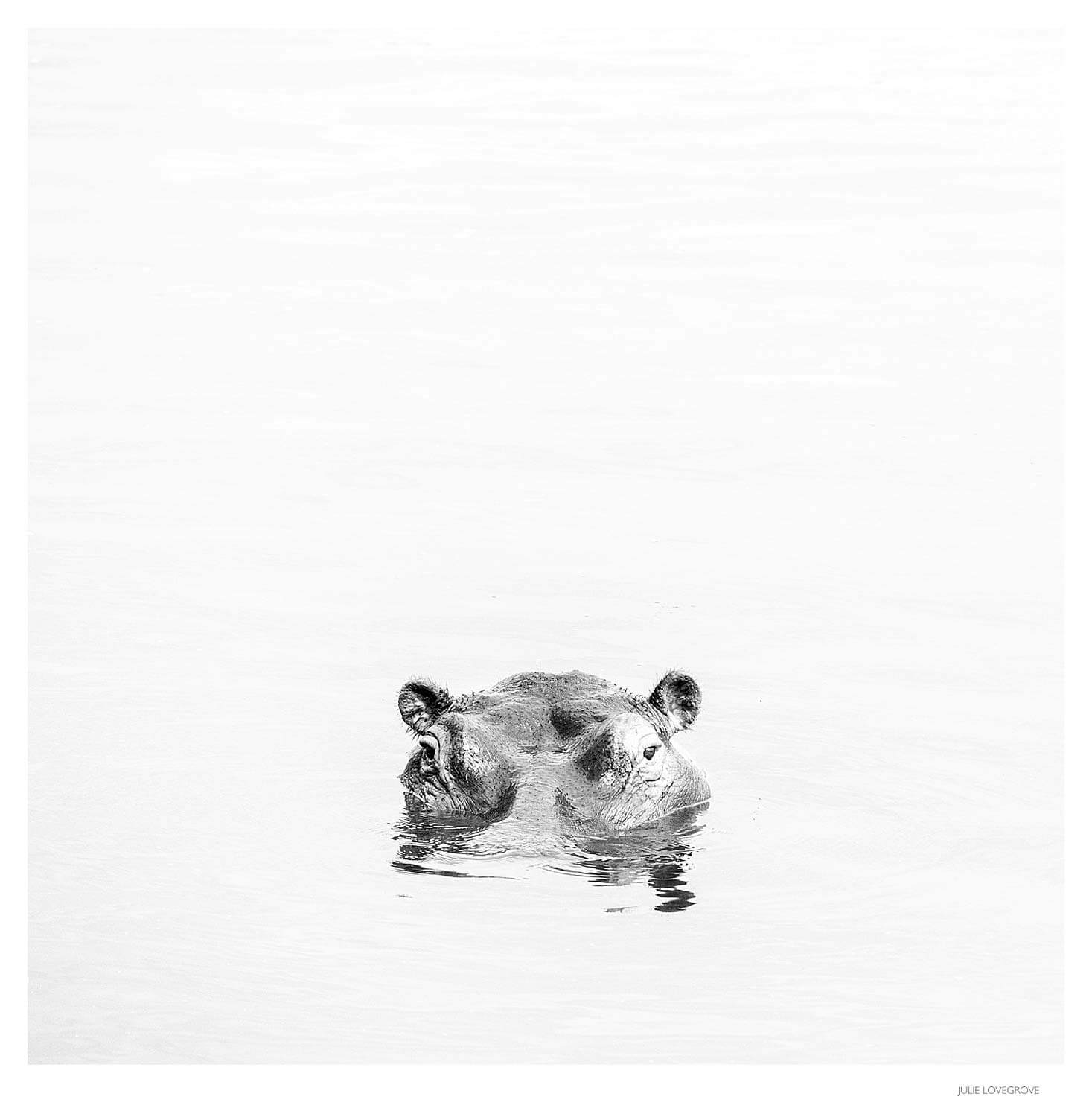 Slow moving giraffe ahead.  But when you’re on safari there is no rush to get anywhere so we were very content to crawl along behind her. 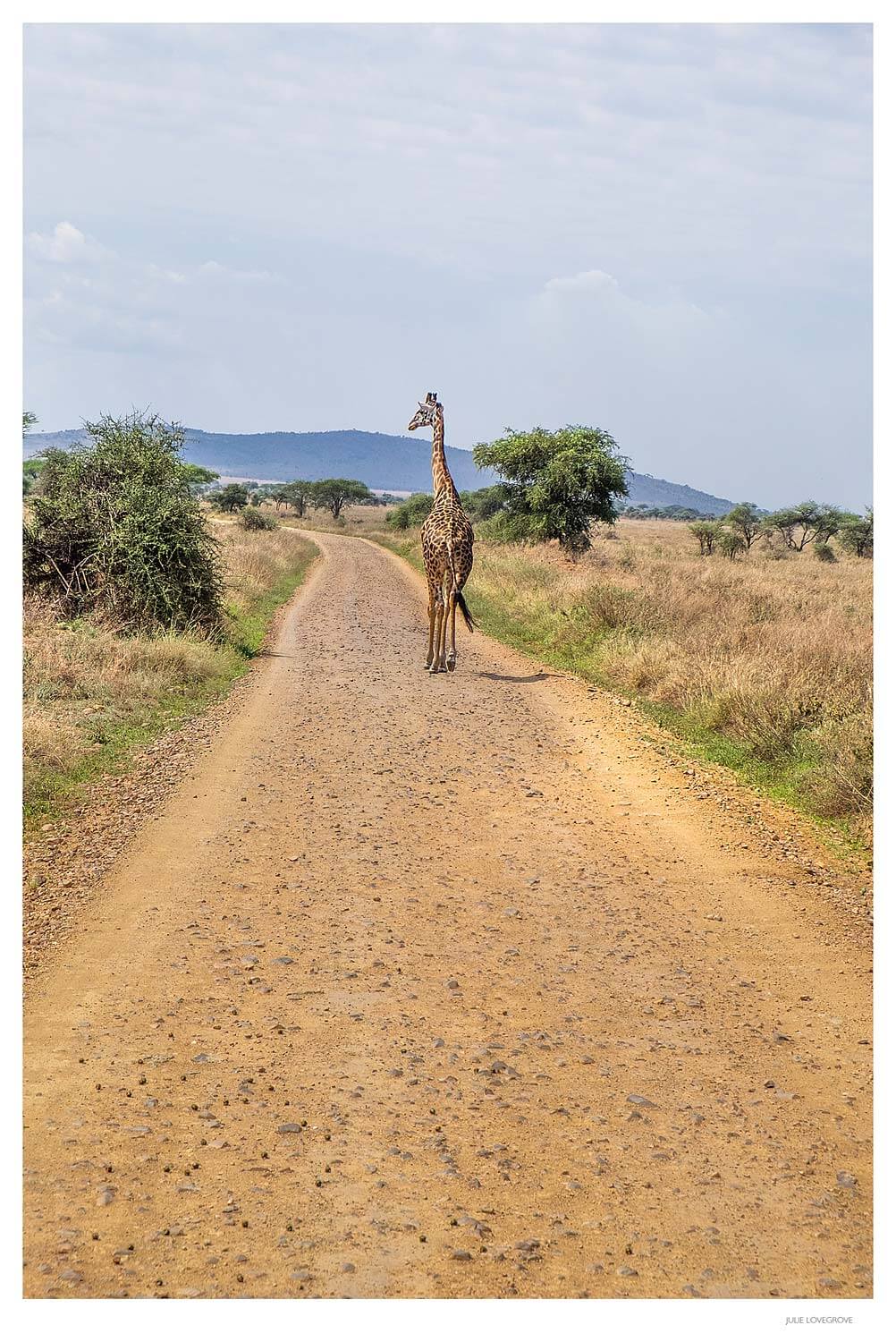 The mating behaviour of lions is a painful process for the female. The penis is barbed and its withdrawal hurts the female who often twists around and tries to attack the dismounting male. This male has certainly been around a bit from the look of him!

Another fun fact.  A group of zebras is called a ‘dazzle’.

See no evil, hear no evil, speak no evil? 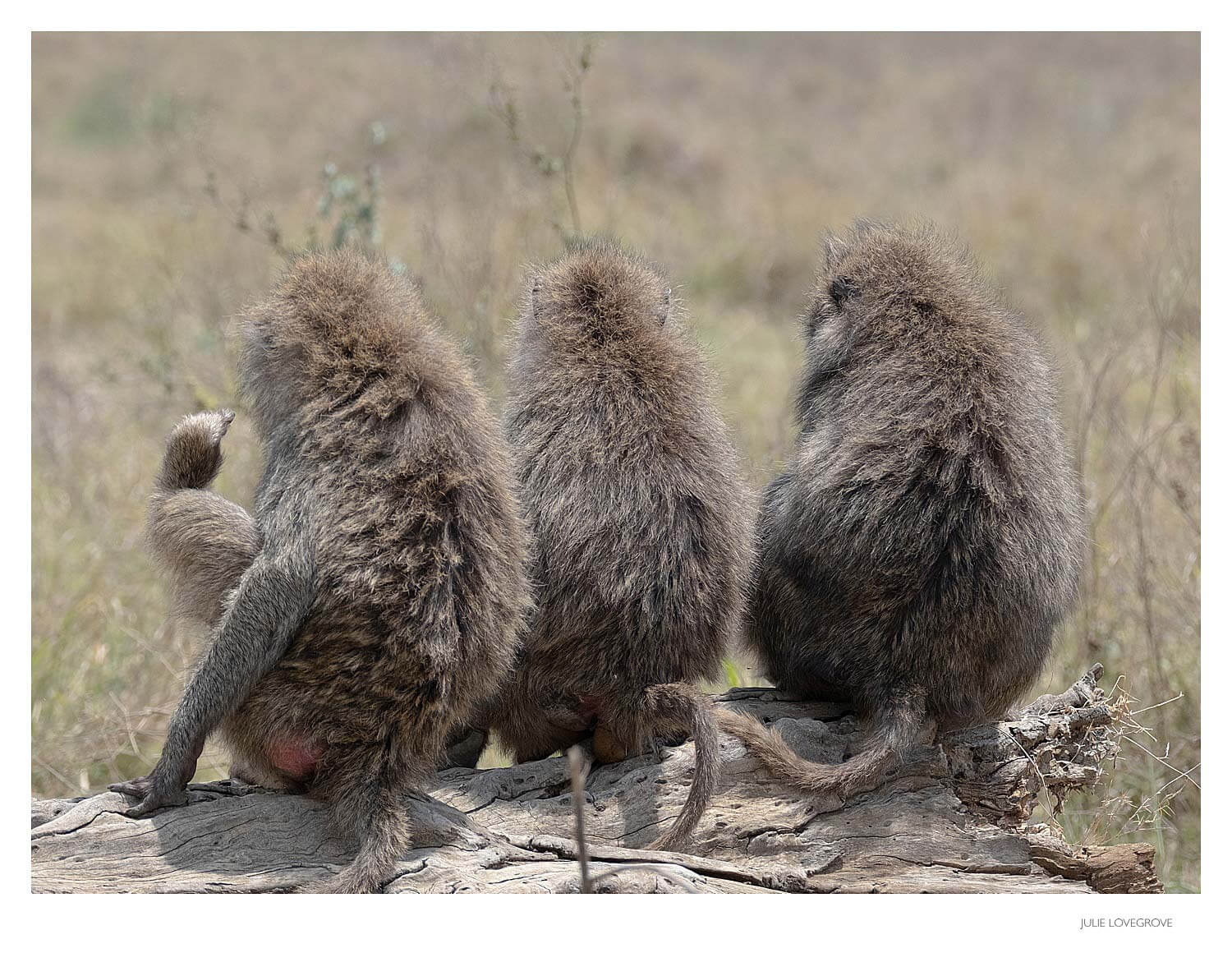 This baby baboon didn’t sit still for a moment.  We watched it scampering over this tree trunk for about 20 minutes and it was hard to lock focus on it.  It finally ran out of energy and fell asleep in its mother’s arms though. 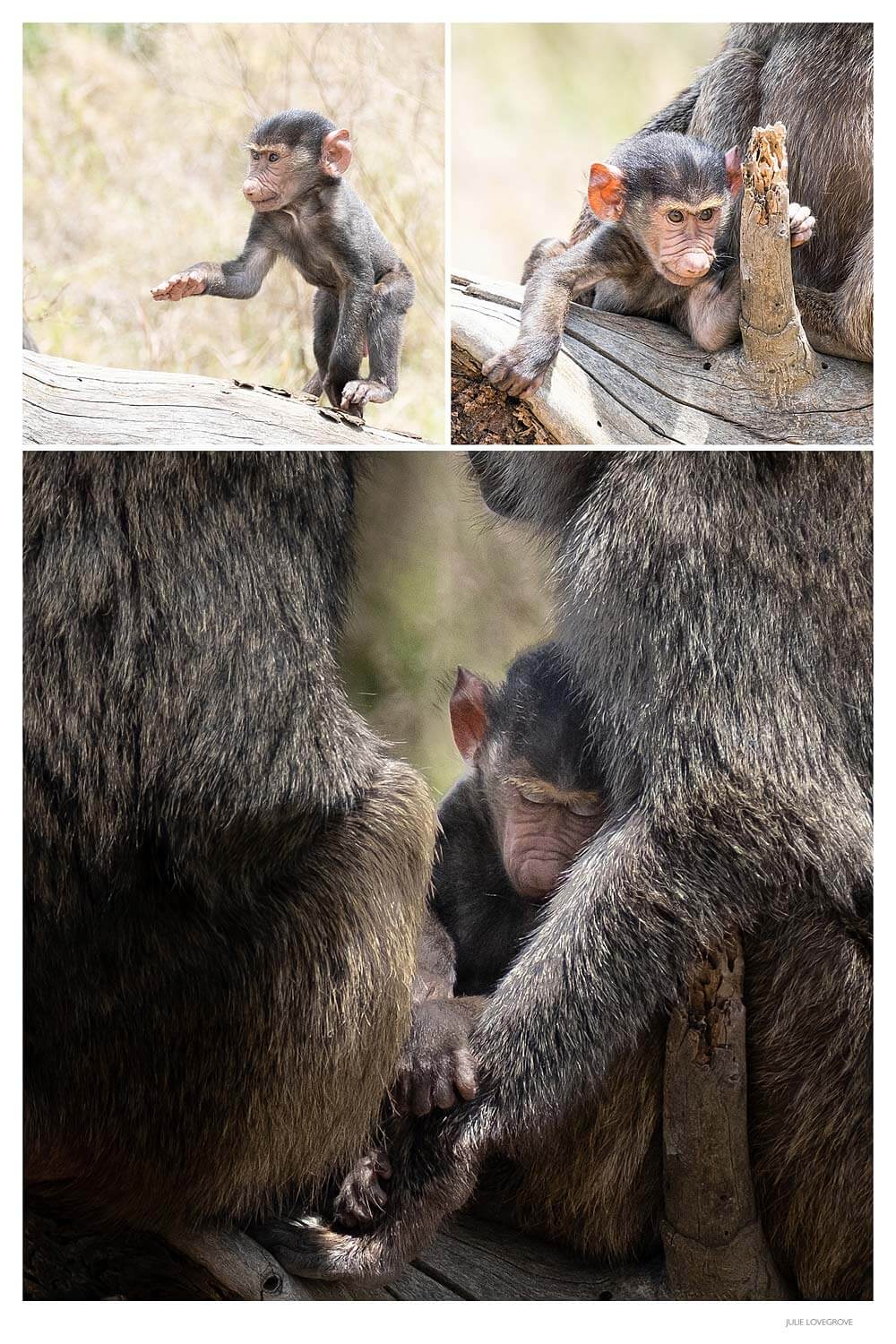 On our way from the Serengeti to our next destination, we stopped at Olduvai Gorge. This is a site that holds the earliest evidence of the existence of human ancestors. Paleoanthropologists have found hundreds of fossilised bones and stone tools in the area dating back millions of years, leading them to conclude that humans evolved in Africa.  There is a museum there which is incredibly informative, modern and well laid out, and it seemed very strange to find this in the middle of nowhere. These two giant skulls are placed on the main route, and we wouldn’t have known that was the location of the gorge without them. 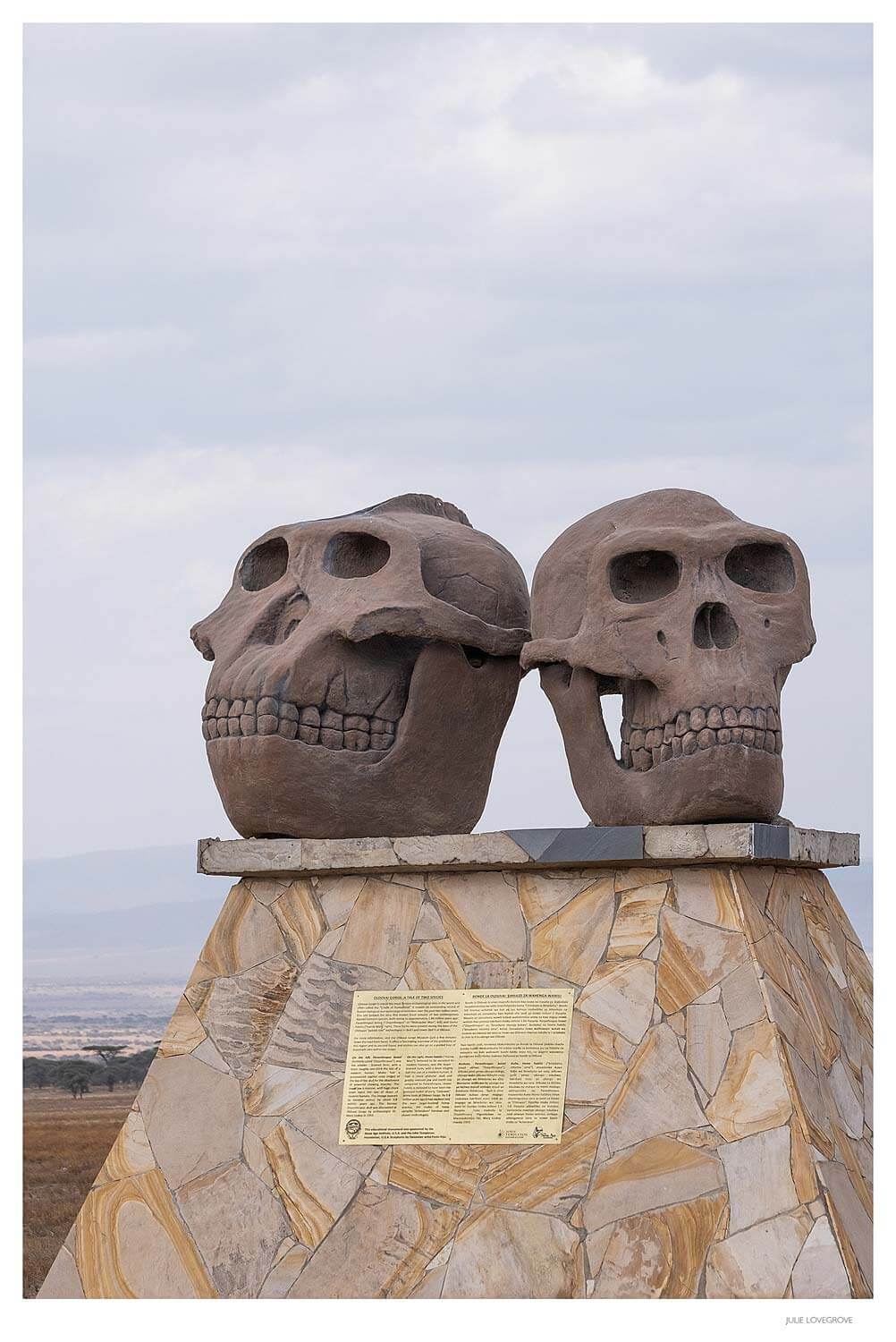